Essay on Air Pollution Cause, Effect and Remedy! 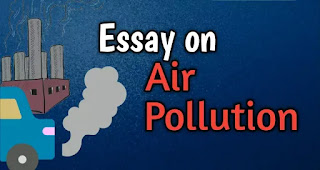 Essay on Air Pollution Cause, Effect and Remedy!

To survive on earth, every living being needs a good environment and its development is possible only with a clean environment. Air is an essential element for survival. But human civilization is at the top number in spreading air pollution. Due to air pollution, not only humans but all living beings are also facing different types of challenges.

When there is an undesirable change in the amount and proportion of gases of the atmosphere due to human or natural causes or the addition of some other toxic gases or substances in the air is called air pollution.

Air pollution is caused by natural and human causes. Natural causes include volcanic eruptions, forest fires, ruminants by animals, fog, meteor showers, etc. But air pollution arising from natural sources is less dangerous because nature has the ability to self-control.

Due to the presence of unwanted gases in the atmosphere humans, animals and birds have to face serious health problems . This causes diseases like asthma, blindness, loss of hearing, skin diseases etc. According to the World Health Organization, air pollution is the main cause of death of 4 to 6 lakh people every year.

According to the Global Burden of Disease, an organization that monitors diseases around the world, air-related diseases in India are rapidly turning into such a dangerous epidemic. If this is not taken care of immediately, it will have dire consequences.

Air pollution has increased the risk of acid rain. Because the possibility of dissolving toxic gases like sulfur dioxide, nitrogen dioxide etc. has increased in rain water. Due to which trees and historic buildings have been damaged.

Government of India's efforts in the face of air pollution:

The Central Pollution Control Board (CPCB) conducts the ambient air quality monitoring program in India. Which is known as the National Air Quality Monitoring Program. Its main objective is to ensure compliance with ambient air quality norms and to take steps to control and prevent air pollution.

It was implemented in the year 1982. The Air Act 1981 was introduced by the Government of India in the year 1981. According to this act, both the central and state government have been given the following powers to counter the effects of air pollution:

We all know that air is very essential to keep us alive. That is why we have to pay special attention to air pollution and we can start it from our home.

We have to plant more and more plants in the empty space and try to eliminate the factors that pollute the environment. Only then one can get rid of air pollution and a happy life can be imagined.

Friends, hope you have liked Essay on Air Pollution. If you have found this essay useful, then definitely share it on social media.

If you want to know new information, then definitely join with us where we upload latest tech & internet updates, study related tips daily.