What is solar cell and solar panel and its uses! 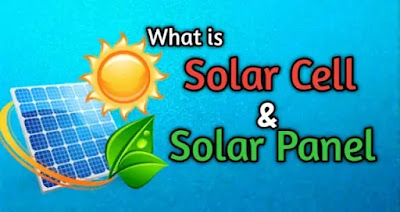 What is solar cell and solar panel and its uses!

This post is specially prepared for class 10 students, which is a very useful question for board exams.  So let's know what is solar cell and what are its uses?

What is solar cell?

A solar cell is a device that can directly convert the energy that reaches the Earth from the Sun into electrical energy.  Friends, about 100 years ago it was discovered that by placing a thin layer of selenium in the light, electricity can be generated. And it was known that only 0.6% of the solar energy incident on a piece of selenium can be converted into electrical energy.  Thus the efficiency of the solar cell was very low.  Hence no special effort was made into this phenomenon for power generation.

What is Solar Panel ?

A lot of electrical energy is required to run various types of devices like artificial satellites, water pumps, radio and television etc. because no single solar cell can provide so much electrical energy. So connecting many solar cells together in a fixed sequence will be useful and this group of solar cells is called a solar panel.

Advantages or uses of solar cells:

The use of solar cells has proved to be very effective in providing electrical energy in remote areas.  It is used in the following places-

If you want to know new information, then definitely join "STUDY IS LOVE", where you are given all kinds of new information and study related tips and tricks.