What is Microsoft Windows & its types!

What is Microsoft Windows & its types! 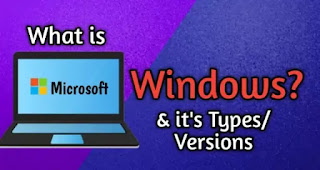 Hey guys, Are you looking for "What is windows ?" Well If so, you've come to the correct place. Today in this post you will be given information about Windows in simple and easy words.

Greetings, friends! We hope you are all well and safe. Friends, in this post we are going to talk about a topic, which name you must have heard many times. So, guys, we are going to talk about Microsoft Windows. Here we will know what is Microsoft Windows? What is its history and what are its advantages and disadvantages? So let's get started right away -

What is Microsoft Windows?

Friends, Microsoft Windows is a Graphical Interface Operating System created by the famous IT company Microsoft Corporation. It is mainly used in Personal Computer i.e PC.

Windows is a Multitasking Operating System designed for single users which is 32 bit or 64 bit. It establishes better coordination between User and Computer with the help of Graphical User Interface i.e. GUI and Graphical Icon.

That is, it helps the user is running or using the computer. Windows Operating System allows us to open different windows simultaneously and do different things at a time in them.

Without knowing this, we may not be able to understand Windows. So let's quickly explain to you about the operating system in short so that you can understand windows more easily.

What is an Operating System?

There are basically three types of windows which are –

Single User Operating System – In this type of operating system, only one person can work on the computer at a time.

Multiple User Operating System – In this type of operating system, one or more people are able to work together on the computer. This type of OS is used in big companies, institutions, hospitals, and colleges, etc.

Multitasking Operating System – This type of OS has the ability to multi-task, that is, it is possible to run more than one program on the computer at the same time.

It was the first OS produced by Microsoft which was produced in 1985. It included other basic functions like Calendar, Calculator, etc.

This was Microsoft's second OS and it was launched in 1987. Some new features like Maximize and Minimize Windows were added to it, but still, Windows 1 was considered better than this.

This OS was launched by Microsoft in the year 1990. It was created by upgrading Windows 1 and 2.0. This OS had virtual memory, better graphics, and multitasking capability which made it extremely popular among people.

Also, it was Microsoft's first OS that had the facility to install a hard disk, as well as the Software Developing Kit, was also available.

By improving the shortcomings of Windows 3.0, an OS named Windows 3.1 was launched by Microsoft in 1992. It was Microsoft's first OS in which RAM and CD-ROM were made available.

It was launched by Microsoft in the year 1995. It brought a lot of changes to Windows. This OS included features like the Start button, Start menu, and Taskbar, as well as it was the first OS that supported long file names. This was the first OS that was 32-bit, before that all OS used to be 16-bit

It was launched in the year 1998. It was specially designed to keep the users in mind. Features like DVD Drive, USB port, the Address bar in Windows Explorer, Back and Forward Navigation Buttons were added in this version.

This OS was launched in the year 2000. It was the last Microsoft OS to be built with MS-Dos. The feature of System Restore was added in this version, with the help of which the facility to restore deleted data was found. For the first time in this version, Windows Media player, Windows Movie Player, etc. came into existence.

This OS was launched in the year 2000. Advanced features like Disk Defragmenter and Device Manager were added to this version of the OS. In this version, plug and play facility was given by connecting many devices.

This version of the OS came into existence in the year 2001. This was the most famous operating system launched by Microsoft. It was very user-friendly. In this version, along with providing a new design by updating the Start menu and Taskbar, many graphical upgrades were seen.

In this version, advanced features like Clear-type and Auto-play were added as well as many Vista Wallpapers, MS Excel, Visual Effects and Shadow Effects, etc.

This OS came into existence in the year 2006. In this OS, work was done to strengthen the security system more. Simultaneously, features like Data Protection, Photo Customization, Video Editing, etc. were also launched.

In this version Speech Recognition, Windows DVD Maker with Windows Media Player 11, and Internet Explorer 7 was updated and introduced. An antivirus program was also added to it.

Windows 7 was launched by Microsoft in 2009. It was designed in a very simple form making it easy and fast to use. This also proved to be a much more popular version.

In this version, users were given the facility to stream music, videos, photos, etc. from computer to stereo or TV. Along with this, advanced features like Handwriting Recognition and Internet Explorer 8 and Photo Flipping, Folders Lock & Unlocking were also launched in it.

This OS came into existence in the year 2012. It was created by upgrading Windows 7. Programs like News, Weather, Messenger, App Store were added by Microsoft in this version. This OS was able to work at a higher speed than other older OS

Windows 10 came into existence in the year 2015. There are constant updates coming to this OS which keeps improving it continuously. It has been built by combining the features of Windows 7 and Windows 8. Microsoft Edge Browser was added to this version. In this version, the facility to switch PC to Tablet Mode was provided.

Microsoft's Operating System is very simple to use. Literate people of any age can use it easily. It is easier to use in comparison to other operating systems.

Microsoft's Operating System is used by people all over the world. Due to its popularity, more softwares are made and available to use.

Continuously coming new versions of Windows also support the programs used on their older versions which makes it compatible.

Expensive Price – The cost of Microsoft's OS is more expensive than other Operating Systems.

Weak Security – Windows OS is considered weak in comparison to other OS in terms of security. The chances of getting hacked on this OS are more than other OS.

Friends, for your information, let me tell you that Microsoft's OS needs to be rebooted continuously, otherwise it is difficult to work in the system or the system stops working.

Friends, hope you must have liked the information given to you about what is windows? If you are interested in reading similar information then you can join "STUDY IS LOVE". Where you are given all kinds of information through the Internet. If you have any suggestions or any questions regarding this post, then you can ask in the comment box below. We will definitely try to answer you