What is Google Firebase & its features! 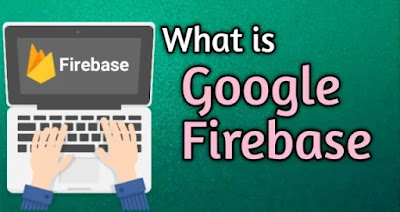 What is Google Firebase & its features!

Friends, do you also want to know what is Google Firebase? and what are the features of Firebase?  So in this post today we will give you the complete information about Firebase in simple and easy words.

Hello friends, how are you?,hope you all are healthy and safe.  Friends, in this post we are going to tell you about a tool from Google, which is known as Google Firebase.

So friends, let's see what is Google Firebase?  When and how was it formed and what are its functions?

What is google firebase?

Friends, Google Firebase is a mobile and web application development platform presented by Google, which provides a lot of tools and services to those people who create or develop them to create high-quality apps and improve their user base and get more profit.

Google Firebase actually works like the Google Analytics Tool.  It analyzes your apps as well as users and transmits that data to the developers.

When and how was Firebase created?

Google Firebase was not actually created by Google.  In fact, Google Firebase was created out of a startup called Evolve started by James Tamplin and Andrew Lee in 2011 which was bought by Google in 2014. After that Evolve was used in online games to find out how long a user has been playing the game.

After that, this tool separated the features of its online chat and real-time data and created a company called "Baas", which Google bought in 2014 and named it Firebase.  After this it was further improved by Google and added many different features.

Google Firebase also provides its users with the facility to store their data.  It stores all the data of users regardless of the type of data.

Google Firebase provides its users with the facility of authentication, with the help of which all the data of the users is completely safe and works to protect their data from hackers.

Google provides better hosting to firebase users as well as it plays an important role in increasing the speed of the app.

If a user has a problem using the app, Google Firebase immediately informs the app developers, so that the developers are able to solve that problem as quickly as possible.

Google Firebase provides such a feature to its users, with the help of which App Developers can easily reach any message or notification to their App users.

Google firebase gives its users the facility of remote configuration, with the help of which developers can make new things in the app created by them remotely i.e. without affecting the user.

Google Firebase provides its users with a feature that lets them know where the traffic on their app is coming from.  With its help, developers get to know from where their users are coming to their app and where their app is being used.

Although I have explained everything about google firebase but still you can watch the following video for better understanding!

Friends, I hope you must have liked the information given on What is Google Firebase.  If you are interested to read more such information then you can connect with "STUDY IS LOVE".

Where we provide all kinds of information through the Internet.  If you have any suggestion or any question regarding this post , then feel free to ask in the comment box.  We will definitely try to answer you.