What is robotics? Its types and how does a robot works?

What is robotics? Its types and how does a robot works?

After all, what is a robot? If you also want to know, then in this post you have been given complete information about the type of robot and how does the robot works.

Hello friends welcome to our SIL Blog, we hope you all are healthy and safe and taking care of yourself and your loved ones in these difficult times.

Friends, one should always keep learning something in life. You must have heard that life is all about learning. We have also started this process of learning something new through our blog and today we are going to add another link to it.

Today we have brought for you a very unique invention or miracle of science, which is becoming more and more popular every day. Friends, today we will talk about such an exciting and funny thing or machine which we know by the name of Robot.

In this post, we will know what is a robot, how does it work? What are the different kinds of robots? So let's start guys - 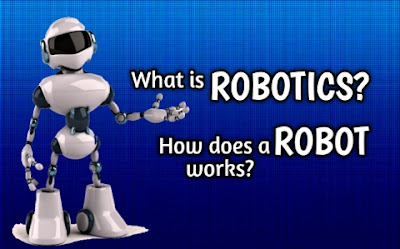 Friends, Robot is actually a machine that is capable of doing more than one task, at the same speed and with accuracy. The science and technology of the design, manufacture, and application of robots is called robotics. That is, Robots are machines that work on the basis of instructions or programs specially put by Computers. The type of instructions that will be given to these machines, they will continue to work accordingly.

Robots have such an ability that they can easily do the work that humans have to put in a lot of time and effort to do. At the same time, they are able to do any work with greater accuracy and with greater speed which makes them so popular.

The present era is the era of technology. Robots have taken the role of humans in many places. At present, they are being used in different types of industries all over the world and their use is increasing day by day.

They are made in different sizes according to the need so that they can be used easily. Robots can be very heavy or very light with very large sizes and very small sizes. They are manufactured according to their work and needs.

How does a Robot Work:

Friends, we have learned that what is a robot and now we will know what is the working of robots i.e. how does a Robot work?

Any robot gets the ability to sense with the help of a sensor system. Power source provides power to a robot to work.

To control all the processes of robots, they have a brain system. This is the brain of robots

•Types of Robots Based on Mechanism:

Following are some types of robots on the basis of mechanism-

3.Legged Robots – These types of robots have legs to move from one place to another. With the help of these legs, they are able to work easily even in rough places.

4.Swimming Robots – Such robots are capable of swimming. A robot named Fish, which was built by MIT University in 1989, was shaped like a fish and also swam like a fish.

5.Flying Robots – Flying Robots are robots that are capable of flying. These types of robots are used in search and rescue operations. Drones are the best example of this.

6.Swarm Robots – When different small robots work together to form a system, they are called Swarm Robots.

7.Mobile Spherical Robots – Spherical or mobile robots move by rolling from one place to another on the surface.

•Types of Robots Based on the work:

Following are some types of robots on the basis of works-

For a better understanding, you can view the following video.

Friends, hope you must have liked the information "what is a robot?" given to you. If you are interested in reading similar information then you can join SIL blog.

Where you are given all kinds of information through the Internet. If you have any suggestions or any questions regarding this post, then you can ask in the comment box below. We will definitely try to answer you