What is Light? what are the properties of Light? 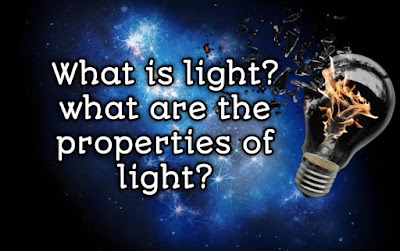 Friends do you want to know what is light and what is the characteristics of light, then in this post we will about light.

If you are a 12th science student then through this post you can know basic information about Light Chapter of Physics.

Friends, whatever object or whole world you are seeing in the world, it is possible to see only through light. So what is light? This question arises many times in our mind. In this post, we will discuss the same thing fully and will know what is light?

Light is part of the electromagnetic spectrum that ranges from radio waves to gamma rays. Electromagnetic radiation waves are fluctuating waves in electric and magnetic fields, which can transport energy from one place to another.

Visible light is not inherently different from other parts of the electromagnetic spectrum . But the exception is that the human eye can detect visible waves. Electromagnetic radiation can also be described as a stream of photons that are each massless particle traveling with wavelength properties at the speed of light.

A photon is the smallest amount of energy that can be transported and the realization that light travels in discrete Quantum was the origin of the Quantum theory.

Light can be generated by matter, or a photon of light can confabulation with energy levels in many ways. Friends, whatever information about Light has been given to you, it is given in the language of science porcelain. To know this in simple words, the definition of light is as follows -

Light is a type of energy that can sense. Light comes from an energy source and first falls on the object and then return from the object & our eyes senses to makes us identify the object.

Friends, for your information i want to say that beings like Firefly who generate light on their own, then generated light by them is called Luminous light and lights from candles, bulbs and matches are called Non- luminous or artificial light.

Speed of Light  in different mediums

Note - (*) This symbol represents the power:-

Guys, you must have got some information about what is light, now we will discuss "what are the properties of light, so let us know-
1. Light moves in a straight line
2. The light has both reflection and refraction properties.
3. Light itself is invisible but with its help we get to know both the position and the presence of the object.
4. There is no need for any medium for the transmission of light. For your information, i.e light can also travel in vacuum.
5. When light moves from one medium to another medium, then light deviates from its path.
6. The speed of light can be different in different mediums, its speed in vacuum is 3 × 10 to the power of 8 meters per second.
7. Light can pass easily through transparent medium but light cannot pass through opaque medium.

Law of refraction of light:-