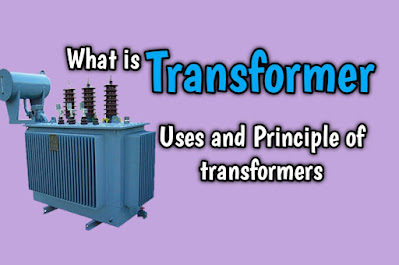 Hello friends and welcome to SIL BLOG. Do you want to know what is a transformer? what principle does the transformer work on and what is the efficiency of the transformer? Today we will discuss these topic. If you study physics in 12th science, then this post is specially prepared for you !

There is a topic in Physics in 12th Science. Today we will discuss this topic fully. If you are a student, then this post may prove useful for you. What is Transformer? this question also appears in the board exam many times and this is a very important question.

Friends, you must have seen the transformer many times and perhaps very few people will have a question about what is the function of the transformer and on what principle does the transformer work. I have prepared this post especially for science students studying in 12th and also every information and question related to the transformer is covered which is useful for the board, so without delay, let us know-

What principle does the transformer works on:

Friends, let me tell you for your information, there are generally two types of transformers which we have described below.

The Step down transformer convert a weak alternating current of high potential into a strong alternating current with a low potential. This transformer often consists of two coils. One of these coils consists of thin wires with more copper wires called primary coils and there is an Iron core between the two coils. In the second coil, thick copper wires are connected in a short turn, which is called the secondary coil.

The Step up transformers convert the strong alternating current with low potential into weak alternating current with high potential. The Step up transformer consists of two coils in which one coil consists of coarse copper wires with short turns called primary coil. And there is an iron core between the two coils. In the second coil there are more number of rounds of thin copper wire, which is called the secondary coil. This means that it is exactly opposite to the Step down transformer.

Efficiency of a Transformer:

Difference between Step down & Step up Transformer:-

•Transformers that are used to reduce the voltage are called Step down transformers.

Transformers that are used to increase the voltage are called Step up transformers.

The Step up transformer reduces the alternating voltage.

•Transformation ratio (K) of a Step down transformer is greater than one.

Transformation ratio (K) of a Step up transformer is greater than one.

Reason for energy loss of transformers:-

•Loss due to Eddy currents.

•Loss due to Eddy currents:

When the alternating current flows in the primary and secondary coils, some of the energy is lost as heat in the copper turns. Cold air and oil are circulated around the coil to absorb the heat generated in the coil so that energy loss can be saved.

Friends, there are many uses of transformers and electricity in our daily life. We cannot imagine how much loss can be caused by lack of electricity. Just think how you feel if electricity is lost for one hour, do tell us in the comment box.

•Transformers are used in Radio, Telephone, Refrigerators and T.V in daily life.

•Where electrical energy is produced electricity is sent to our homes by reducing the current intensity of the transformer.

If you have any question about this information, then definitely ask in the comment box. Friends, if you are interested in similar information and want to know more about science and technology, then subscribe SIL BLOG for lastest update.