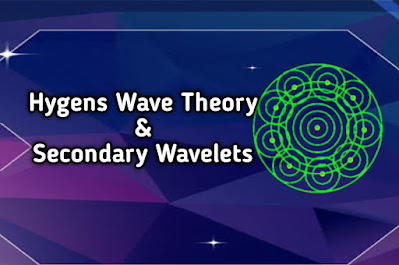 Friends, do you want to know Huygens wave theory and Huygens theory of secondary waves, then you have opened the perfect post. Today I will tell you "what is the principle of Hygens"

This is a useful and necessary question for board exams. The wave theory of Hygens is asked in board exams almost every 2 years, so let me explain you in easy and simple words. Friends, for your information, let me tell you that the wave theory of light was presented in 1678 by the Dutch scientist Hygens.

According to the Hygens wave theory - Light moves in the form of waves, i.e it moves as light waves. The waves move from the light source to the speed of light in all directions. Waves require a medium to move, so Hygens imagined a ubiquitous medium ether & found that it is weightless and penetrates through all matter. It has all the essential properties of transmission of light wave.

The speed of light in vacuum is 3 × 10 * 8 meters per second. It was assumed that the density of ether is very low and the elasticity is very high. In this type of imaginary medium waves of light can move. When these waves fall on the retina of the eye, we see the object.

Hygens formulated a theory regarding the transmission of waves in a medium, which is called Hygens theory of secondary wavelets, for this Hygens made the following hypothesis. –

•When waves emanate from a wave source located in a medium, the particles of the medium located around the source start vibrating. The surface in which all the particles in the medium are in the same phase of vibration is called waveform. If the wave source is a point, then the wavelength is spherical; at a great distance from the source the waveform is almost flat.

•It acts as a source from which new waves emanate in all directions. All these waves are called secondary waves and it also moves at the speed of the primary wave in the medium.

•If at any moment you pull the surface of these moving secondary waves , then this surface will show the new position of the waveform at that moment.

• Hygens's wave theory can explain the laws of reflection and refraction of light.

• Hygens's wave theory can explain interference and diffraction of light.

• In Hygens wave theory, light was considered as longitudinal, due to which the polarization of light cannot be explained. Polarization can be explained by assuming light to be transverse.

• Michelson did not consider the presence of the imaginary medium ether to be correct by his experiment. Hygens's wave theory cannot explain light electrical effects, etc.

We hope that you have understood the wave theory of Hygens and the principle of secondary waves of Hygens. If you have found this information useful, then definitely share it with the 12th science students.

If you are interested in similar topics and technical fields, then definitely join with "STUDY IS LOVE" where we upload all kinds of new information. If you have any query regarding the information, you can ask in the comment box.