What is SSD? You don't know these things about SSD

What is SSD ? and how does it works? 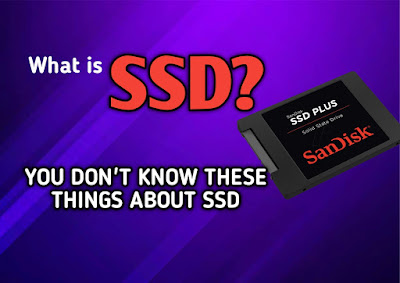 If you do not know what is SSD ? and how does SSD works? Well friend if you have ever bought a new laptop or computer, then you must have heard the name SSD because it is becoming very popular nowadays and has a big reason for computer speed.

So read this post till the end because in it we will know what is SSD ? & how does it work and how is different it from a Normal Hard Disk.

Friends, the full form of SSD is Solid State Drive. It is used to store data like the Hard Disk available on our computer. But SSD Hard Disk works faster. There are many reasons behind its fast work.

But we can say, SSD is an update of a Hard Disk or a new version. Which has been created using new technology. It is lighter and smaller in weight than an ordinary Hard Disk.

SSDs have been invented to make computers faster and consume less power and the special thing about SSD is that it is very efficient and consumes less power than HDDs. SSD is a form of flash storage in the same way that a memory card or pen drive is.

There are many types of SSD which are divided according to their connectivity and speed. These are-

This type of SSD looks similar to a laptop hard drive that supports a simple SATA connector is similar to a Hard Disk. This is the simplest SSD form factor, which can be identified by observing it. This type of SSD first came into the market and still runs in markets. These SSDs are available nowadays in any PC.

MTS-SSD Disk differs from normal SATA SSD in connectivity and form factor. It is very small in size and quite different in appearance from a normal SSD. This is seen in the case of normal RAM stick and connectivity. It cannot be used on every PC. To use it, it is very important to have your PC SATA port. Such SSDs are used in laptops.

Such SSDs are similar to M-SATA SSD disks. But this is an updated version. Which is faster than SATA SSD. But despite being small, it supports both types of connectivity i.e you can also connect it to a normal SATA cable. M.2 SSD The disk is like a PCI-E Express Port. But it's small.

SSHD cannot be completely called SSD as it is made up of both Solid-state drive and Hard Disk. It has some memory of SSD and some hard disk i.e. it is the thing between both hard disk and SSD. SSHD Disk is used in today's laptops.

How does SSD work:-

As we know, Hard Disk consists of a magnetic disk whose data transfer and access to the Hard Disk is known by rotation. But this does not happen in SSD. All work is done by semiconductors. It works just like RAM. Because the semiconductor communicates better than a magnet, it is much faster.

The speed of SSD is faster than Hard Disk whereas hard disk is much slower than SSD.

The SSD is also smaller in size than a normal Hard Disk, and since a Hard Disk is a mechanical drive that runs on the disk, It also makes little noise while the SSD is a storage device with flash chips in it. It does not make noise at all.

Which disk should I use on PC:-