What is network ? & what are its types?

What is Network? & what are its types? 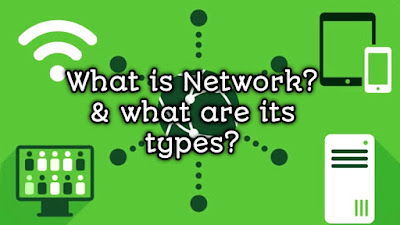 Are you searching for what is a network and type of network? Well if yes you have selected the correct information article. Friends, when the computer was first revealed, it was just a tool in itself.

But later its widespread use opened the way for systems such as hardware and software to communicate with computers through it.

Computer communication means the process through which data instructions and information from one computer can be transmitted to another computer. In the beginning, only large computers had the ability to communicate.

But now even the smallest computers and equipment can communicate with each other and all this has been successful only through networking. Let's know what is the network and why there was a need for networking?

A network is a group of computers and devices that are connected through a communication channel. Through this, a user can share data, information, hardware, and software with another user. In other words, the definition of a network can be something like this--

Definition of network:- When one or more computers connect and exchange information through some medium, then the medium through which information is exchanged, is called a network.

Personal and institutional computers are added to a network for various reasons. It has the ability to share data, information, hardware, and software, and to establish communication

Networks are commonly used by private, business houses, institutions. Because every business and organization has its own specific requirement, therefore every network is unique in itself.

A network in a building or group of buildings in which two or more computers are physically connected to each other. Known as Local Area Network (LAN)

Here the connected computer is known as a workstation. In LAN, the computers are connected to each other so that expensive equipment such as laser printers can be used jointly. Also, databases and applications in the server can only be available through all workstations.

Local area networks have their own topologies such as bus rings, stars and they simultaneously implement more networking protocols such as - Apple, Ethernet or TCP / IP.

A metropolitan area network is a high-speed network, which can share data up to 200 Mbps. It can be rapidly transported up to a distance of 75 kilometers to a few blocks of buildings or the entire city.

The transmission speed is determined by the network's architecture, and it may be higher for shorter distances. MAN includes one or more LANs even telecommunications equipment such as microwaves and satellite relay stations are used in MAN. Metropolitan area networks are smaller than wide-area networks. But its speed is usually higher

A wide area network is a computer network. Due to the long-range communication capability of the WAN, it is quite different from the LAN & WAN. Under this network, the entire country, and all the sites of a large multinational company can be covered.

Wide area networks are used to connect local area networks and other networks together. So that the user sitting in one place can easily communicate with the other user located at a large distance.

Most wide area networks are built by a particular organization and are private. They are also made by other Internet service providers and are connected to the Internet by providing a connection to an organization.

Friends, let me tell you for your information, communication is usually provided by one or more national and international government units.

The necessity of Networking:-

The need for networking arose in view of the following facts in computers.. Let's discuss it –

4. To perform a facilitated communication

Any legitimate user can access and use the data and information stored on any other computer in a network while working on their own computer. For example - the database of computer information can be saved on the hard disk of the server.

Any legitimate user included in the network, even a mobile user using the help of a hand computer can also access the database and use it. The convenience of accessing storage data and information is a very important feature of many networks.

Software used in software sharing is stored in the hard disk of the server so that multiple users in the network can reach and use them simultaneously.

The site license fee is usually fixed on the number of computers or users included in the network. Sharing through the network is almost non-existent compared to purchasing separate software for each computer.

To perform a facilitated communication through email, messages, chat rooms, telephone, and video conferencing can be done in an effective and easy way using the network. Email messages are usually prompt delivery. Sometimes it also acts as a communication business network.

Friends, let me tell you for your information. A network range is of size. A small network connects two computers, whereas on a global network such as the Internet, millions of computers in the world remain connected and exchange information. The network can connect everything from handheld computers to supercomputers.

What is network hardware?

1. Computer → The most important function of a network is to connect computers. When computers are connected, people can use them to work more effectively that is why computer networking comes under the hardware.

3. Connector → A connector is a device that interconnects two networks. The most common connector is Hub and Router.

4. Cables → You must have seen a group of wires or a glass wire, all these are called cables. The use of cables is also very important for networking. Because data sharing work is done through this,. This is very important networking hardware.

5. Resource → Any part of a computer system or networks such as a disk drive, printer, or memory that may be allocated to a program. They are called resources.

If you want to know the latest updates, then join the STUDYISLOVE BLOG, where you get all kinds of new information about technology. Thank you!