5 types of operating systems that you don't know!

5 types of operating systems that you don't know!

Hello friends, welcome to the SIL BLOG. Here we always give information about Internet and Technology. So in this post, we will learn about the types of operating systems.

Friends, as far as I think most of you know about the operating system if you do not know then do not worry, we tell you in simple words that the Operating system refers to the collection of software. Which manages the hardware resources of the computer and provides large-scale services to the user. Different types of computer operating systems refer to collections of different software. Each Computer has an Operating System to run other programs.

Any operating system performs some basic functions such as identifying input data from the keyboard, keeping files and disk directories, and sending output to the Display Screen, controlling devices such as printers. An operating system can also perform a single task or a system operating change. 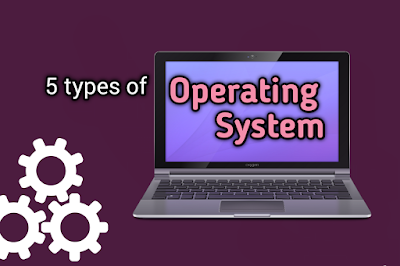 Types of the operating system :

Friends computer operating system can be classified into 5 main types.

The graphical mode interfaces operating system is a Linux mouse-based operating system. In which the user conducts the task without typing the command from the keyboard.

The CUI is an operating system based on text. Which is used to interact with software or files by typing commands to perform specific tasks.

Real-Time Operating System is also known as a multitasking operating system. Normal operating systems are responsible for managing the hardware resources of a computer. RTOS performs these functions. But it is specifically designed to run processing at fixed or precise times with high reliability.

Batch OS users do not directly collaborate with the computer. Each user prepares data like a punch card on an off-line device and hands it over to a computer operator. Programmers leave their programs along with the operator and then sort the program with the same requirements in Batch.

Time-sharing is a technology that enables multiple people to be located at different terminals, to use a particular computer system at the same time. Time-sharing or multitasking is the logical extension of multiprogramming. Process time that is shared between multiple users simultaneously is called time-sharing.

The operating system uses CPU scheduling and multiprogramming to provide a small fraction of the time to each user. Computer systems that were primarily designed as the Batch System have been modified into time-sharing operating systems.

Distributed operating systems use multiple real-time applications and multiple central processors to serve multiple users. Processors communicate with each other through various communication lines such as telephone lines. These are called loosely coupled systems or distributed systems.

Processors in a distributed system may vary in size and function. These processors are referred to as sites, nodes, computers, etc.

The function of an Operating system:

Process Management is an example of a program that is being executed. This process includes many elements. Such as identifiers, program counters, memory pointer and reference data, and similarly Process is actually the execution of those requests.

In computer architecture, the combination of CPU and Storage is the brain of a computer and is managed by input and output resources. Man interacts with machines through 1/0 Number.

Display, keyboard, printer, and mouse are 1/0 devices. The management of all these devices affects the throughput of a system. Therefore, the input and output management of the system is the responsibility of the Operating System.

Storage management is a function of the operating system that handles the memory allocation of data. There are different types of memory devices in the system. Such as RAM, Hard-Disk, and Cache Storage Memory. Instructions and data are kept in RAM & cache memory. Which is referred to by the Running Program. However, Data is lost when power is cut so the hard disk is a Permanent storage device, In which Data gets saved automatically.

Operating Systems control the hardware resources of the computer. Kernel and Shell are parts of the operating system, those who conduct the necessary operations. When a user gives a command to perform any operation then the request goes to the Shell section. Which is also known as an interpreter.

The Shell part then translates the human program into machine code and then transfers the request to the Kernel part. When Kernel receives a request from Shell, then processes the request. The kernel is also known as the heart of Operating Systems.

Shell is a part of the software. Which is placed between the user and Kernel and provides services to Kernel. Shell thus acts as an interpreter to convert Commend from the user into Machine Code. There are two types of shells present in different types of operating systems - Command-Line shells & Graphical shells.

The kernel is a part of the software. It is like a bridge between Shell and Hardware. It is responsible for running the program and providing secure access to the computer's hardware. The kernel is used for scheduling. That is, it maintains a timetable for all processing.