5 types of printers that you don't know!

5 types of printers that you don't know! 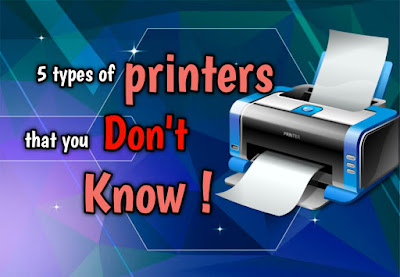 Friends, today we will talk about the printer i.e What is Printer and types of printers . Friends, you must have seen the printer in many shops, offices, colleges, homes or markets.

When you see a printer in stores or offices have you ever thought what is a printer? & how does it works. If you are a person connected with technology, then this post can prove to be good for you.

You must have noticed that whenever you go to the market for photocopying or taking out your photo, it is the printer that gives you the copy of the photo or make same duplicate. Have you ever had a question that how is the process of printer possible.

Which gives us a copy of any document in real time. So today we will know the information about printers in Hindi and also know what are the types of printers.

A printer is an output device. It is used to make a hard copy of the computer's data. Printers are the only device which most commonly used after keyboard and mouse.

Printers are used at homes, offices to print signs, office documents, etc. Normally the printer is connected to a computer with a data cable and when you give Ctrl + P command from any document, it gives you the print.

But nowadays new technologies are used with printers. In which wireless printing is the main one. In this case, the printer has Wi-Fi and the cloud connections. From which you can command the printer while you are sitting away from the printer. With cloud technology, you can also command the printer from mobile and can print out any documents.

An impact printer is a type of printer, which works by direct contact of an ink ribbon with paper. A metal or plastic pinhead strikes the ink ribbon, so the ribbon is pressed on the paper and the desired character letters, marks, dots, lines, etc. are printed on the sheet. The examples of impact printers are given below-

With the help of carbon, multiple copies can be made at one time. Dot-matrix printers have lower initial cost and cost per copy but the print quality is not much good. Currently, the use of dot matrix printers has reduced significantly. They are now mainly used for printing in banks and restaurants. 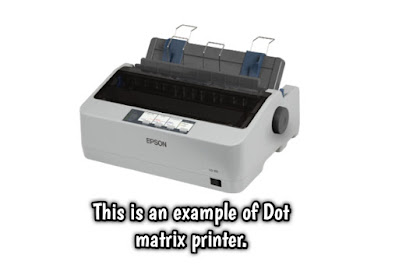 To print a word, the printer rotates the circle until the letter appears in front of the paper. After this, Chakra is hit with a hammer. With this force, the word on the wheel is pressed with ink on the ribbon and the letter is printed on the paper. Pictures cannot be printed with the Daisy Wheel printer. The daisy wheel printer can print only 10 to 75 characters per second. 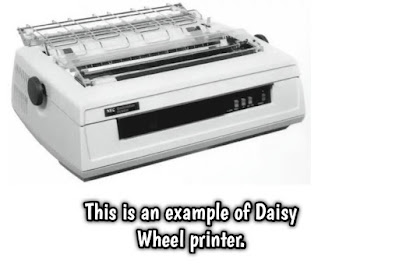 As the name suggests, this printer is called a drum printer. Because it is the same size as the drum. The surface of the drum is divided into tracks and letters are printed on these surfaces. The drum rotates at high speed to print. Each print position has a print hammer on the back of the paper.

With this hammer, whatever letter is to be printed on the paper, the ribbon is struck with ink. It takes a round of drums to print each line, that is, the letters in a line are not printed together. But all this happens at such a speed that it is kept under the category of line printers. The average speed of a drum printer is 300 to 2000 lines per minute. 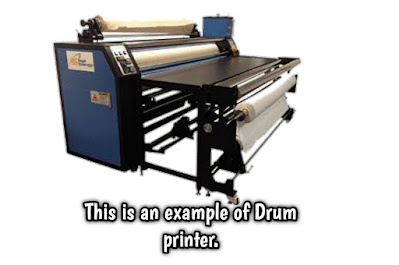 Friends, for your information I would like to tell you that the print in Non-impact Printer is done through laser printing, i.e the print head and the paper are not directly connected to each other. The quality of this printing is very good. Most of these printers are used in the modern era. Spray and other electronic techniques are used for printing in these printers. Following are the examples of Non-impact printers-

Inkjet printer is a non-impact printer. In which a bottle of ink is connected to the printers. Inkjet printers have a print head, which can have 64 small jet nozzles. In this type of printer, the ink droplets are released on paper with the help of a jet by the effect of the electric field. Which gives shape to the character.

The output is displayed by spreading small droplets of printer ink on the paper. It can print one line at a time. These are usually colored ink printers. Its price is also less than other printers. 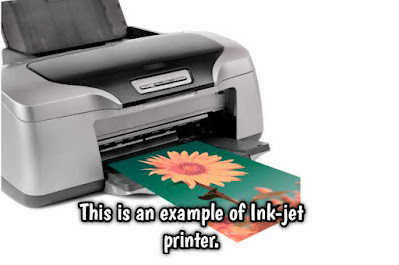 Laser printers are a common type of computer printer. Which produces high-quality letters and images on plain paper at a rapid speed. Like digital photocopiers or multi-functional printers, laser printers also use a xerographic printing process.

But it differs from analog photocopiers in that the image is produced by direct scanning of a laser beam on the printer's photocopier.

A laser beam projecting an image of the page being printed, rotating on an electrically charged drum on which a layer of selenium is mounted. Light conductivity removes the charge from those regions. Those who are shining light.

The particles of dry ink (toner) are then electrically picked up by the charged regions of the drum. After this, the drum prints the image on the paper by direct contact and heat, which mixes the ink on the paper.

Laser printers have several important advantages over other types of printers. Unlike impact printers, the speed of laser printers can vary widely and is dependent on many factors. Including the graphic intensity of the work being done. The fastest speed models can print more than 200 pages of one color per minute.

Fastest color laser printers can print more than 100 pages(6000 pages per hour) per minute. Extremely high-speed laser printers are used for mass transmission of personalized documents, such as credit cards or convenience bills, and in some commercial applications they compete with lithography. 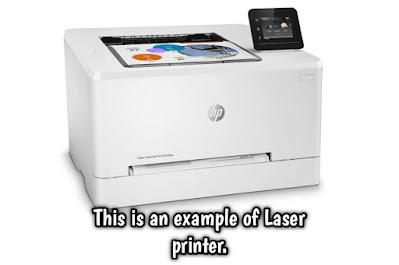 A duplexing printer is a printer that prints on both sides of the paper. So it can reduce the cost of paper and reduce the volume of the file. Duplexers, previously only available in high-range printers.

Now, this is common in mid-range printers as well. However, not all printers can contain a duplexing unit. Duplexing can also slow down the page-printing speed due to the long path of paper.

We hope you enjoyed "what is the printer? types of printers. If you have any questions about this post, then you can feel free to ask in the comment box. We will definitely try to answer you.

If you like this information. So, share it on social media so that more people can also know about the types of printers.