Everything about Ragging: what to do? 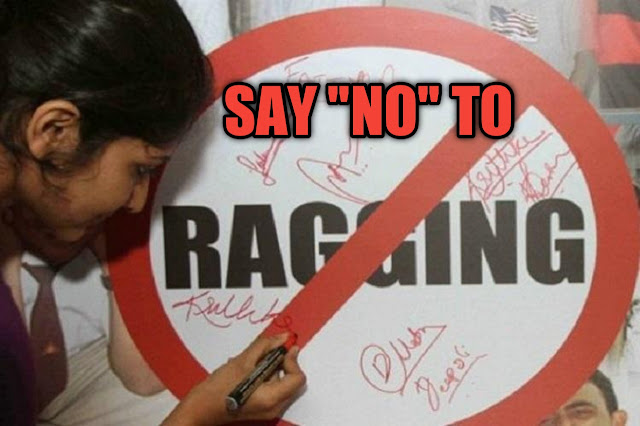 Everything about ragging: what to do?
Ragging is an initiation ritual practiced in higher education institutions. Ragging involves abuse, humiliation or harrasment of new Junior students
Effect of Ragging:-
1. The victims of ragging can suffer mental depression, isolation and ragging can also change the behaviour & personally of the victim.
2. In extreme casses due to prolonged depression, the victim may also commit suicide.
3. If ragging is not eliminated at any point, the entire learning environment is destroyed.
4. If one experiences ragging in a very bad way, it is possible that there will be const fear and tension at every stage of the victims life.
5. Due to ragging free and liberal environment in learning disappears in some colleges or institutes.
What to do if some one ragges you ?
Rulles or laws related to ragging are becoming criminal offence as the trend of ragging is changing with the use of technology.
Therefore, the ragging laws are made strict so that no one commits suicide or feel harrasment due to ragging. Ragging in college or hostels can also affect personal life as it can becomes personal revenge.
If somebody ragges you do the following three things:-
1. Report ragging incidents to the college authority or HOD:
First of all don't be afraid to raise your voice, don't assume anything in mind after the ragging incident and get united with your friends complain HOD about it. You can do this if ragging is no serious or likes to be abused.
HOD will make a note and warn for such students involved in ragging.
If they are ragging to most of the juniors, HOD can take it to the principal, given the seriousness of the ragging incident. In such case students involved in ragging may be warned or suspended for some days.
2.Report the incident to the Anti ragging committee:-
All educational institutions will have an anti ragging committee. It is to be seen that senior students usually ragges 1st year students. Victims of ragging can complain to any one officials of the anti ragging committee.
Students should make a written complaint about the incident of ragging. In the complaint it should clearly state how they rip you off. The anti ragging committee will take action in view of the seriousness of such ragging incidents on campus or in hostels.
3.Go to the police and report the incident:-
Well that is the extreme step,but when nothing helps, you should take this one. You can register or complaint with your nearby police station. Seeking the help of police is not difficult, they are of great support in such cases. You can call the police if tge situation is very vulgar. If seniors warn you about police complaint don't be afraid.
Readmore:
Conclusion:-
In recent times, ragging culture has been declining. Still, some casses are reported when the college reopens. As long as the punishment is not severe, the militant culture will remain. But don't be afraid of it, Government is trying to end ragging and there are many laws against ragging.
We hope you found this article helpful. Give your comments & opinions in the comments box below.